← back to
Grand Jury Music
Get fresh music recommendations delivered to your inbox every Friday.
We've updated our Terms of Use. You can review the changes here.

Off With Our Heads EP 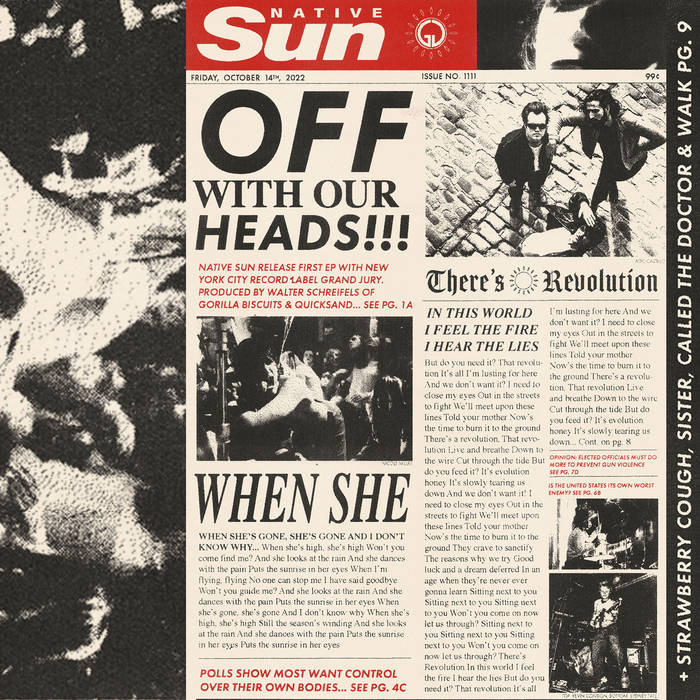 No conversation about New York City rock’n’roll is complete without Native Sun. Fronted by Colombian-American songwriter Danny Gomez, the band makes cathartic and timeless songs that are undeniable. Along with drummer Nico Espinosa and bassist Justin Barry, their livewire local gigs are simultaneously welcoming and rowdy and it’s made them a can’t-miss fixture of city nightlife. But on their latest EP Off With Our Heads, they’ve crafted their rawest and most resonant collection of songs yet. Produced by Walter Schreifels (Gorilla Biscuits, Quicksand), the tracks burst with the kinetic energy of their live show but find Gomez singing about grief, his disillusionment with the world, and lovingly documenting the lives of the outcasts and misfits in his home.

From Native Sun’s earliest days, the band has thrived on winning over new fans, building a scrappy but sizable following thanks to their unpredictable and chaotic sets at packed and sweaty clubs across town. They’ve toured with White Reaper and Geese and shared the stage with bands like Sunflower Bean, Bodega, Gustaf, and Wavves. Barry even joined the band after one particularly raucous night as a fan in the middle of a Native Sun mosh-pit at Baby’s All Right where he chipped a tooth. But the past couple of years when concerts and a physical music community were paused allowed Gomez to reassess and focus on his songwriting. He locked himself in his Brooklyn apartment he shares with Barry and focused on writing a song a day for however long he could. He came out with material that’s startlingly honest and unflinching in its intensity.

One of the tracks from these solitary sessions is “When She,” written about Gomez’s mother, who died from cancer in 2021. “Seeing somebody you love fade away inside and imagining what it must be like for her viewing the world but being totally paralyzed was what I couldn’t stop thinking about while making this song,” says Gomez. Mining the records he loved as a kid like The Beatles’ Revolver and the Byrds’ Sweetheart of the Rodeo, Gomez sings over shimmering guitars, “And she looks at the rain / And she dances with the pain / Puts the sunrise in her eyes.” Though it’s by far his most personal offering yet, Gomez wrote the song in a blistering and healing 30 minutes. “When Danny showed us that song, it was really emotional,” says Barry. “Everyone in the band has lost a parent. It’s all something we share and have bonded over.”

To record these songs, Native Sun found a kindred spirit in producer Walter Schreifels, a legend in punk music who founded iconic bands like Quicksand and Gorilla Biscuits. Though Native Sun are far from a hardcore band, Gomez and Schreifels found common ground easily. “He fell in love with our sound and we fell in love with him,” says Gomez. “What inspired him to play music for the first time were the same things that inspired us then too: The Ramones’ Rocket to Russia, T. Rex’s Electric Warrior, and the Stooges’ Raw Power.” Recorded live straight to tape at Studio G in Brooklyn and mixed by Jeremy Snyder (Idles, Fontaines D.C.), songs like “Sister” are searing and confrontational, taking as many cues from Lou Reed as Martin Scorcese’s After Hours. “With our sound, we're really trying to bridge that line between stadium rock and art rock but take out all the cheese and combine it with something more thoughtful and authentic,” says Gomez.

Another highlight comes in the probing and incisive “There’s Revolution.’ On the track, Gomez wonders why and how radical ideas become commodified. He sings over a pummeling wall of fuzzed-out riffs, “That revolution / It’s all I’m lusting for here / And we don’t want it?” Though it’s uncompromising in its bleak assessment of America, Native Sun isn’t pessimistic. In fact, on Off With Our Heads, the band found solace and hope in this pent-up energy and aggression from the sheer confusion of the world. With Gomez and Espinosa both immigrants from South America, their unique perspective has made rock music so quintessentially full-of-life and so quintessentially American: everyone is invited to the party. “For us, music is do or die,” says Gomez. “This is a band that doesn't repeat themselves but is still always themselves. We want timelessness over trends.”

Bandcamp Daily  your guide to the world of Bandcamp

The Hammer and The Relentless from the Boston band Malleus stop by for a chat.